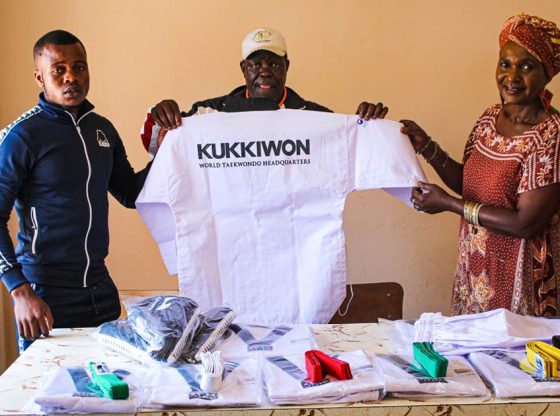 A former Midlands State University Accounting student Lazarus Maringehosi has donated a Taekwondo kit worth over US$2000 to the University Sports Department. The hand-over ceremony of the kit was presided over by the MSU Director of Sports Mr. James Chivivi at the main Campus in Gweru, on the 18th of October,2019.

The kit which was sourced through Zimbabwe Taekwondo Association from the South Korean Embassy will be used by the Taekwondo Club during their matches with other institutions and clubs. Taekwondo was first introduced at MSU by Maringehosi who started off as a karate player and brought several gold medals from the ZUSA games. He was asked to do a demonstration at Great Zimbabwe University and the University of Zimbabwe before the institution could consider introducing the sport. His passion drove him to start training some of his colleagues and later led them to participate at the Korean Ambassador Cup in which three of the team members got medals in 2018.

He paid tribute to the Zimbabwe Taekwondo Association who have worked hard to ensure that the they source the kit for the MSU team from the South Korean Embassy.

“This is one the institutions where sport is taken very seriously and as a profession. There is a lot of talent out there and I would be happy could you could recognise them, help and taken them to where they can excel,” he said.

Mr. Chivivi expressed gratitude to Maringehosi saying such initiatives are boosting the visibility of the institution not only in the region but internationally.

Meanwhile Mrs. Mangoma said: “I`m so impressed that you have thought of home. Our duty as the Alumni Relations is to coordinate the departments and we are so proud the work you are doing. The MSU flag is flying high.”

The MSU Club which has been registered as a member of the National Taekwondo Association has so far participated at the Zimbabwe University Sports Association (ZUSA) games from which it brought home four medals.

Let us know if you liked the post. That’s the only way we can improve.
MSU commemorates Cyber Security month through a public lecture
3507 Conferred with Degrees at Historic 21st MSU Graduation