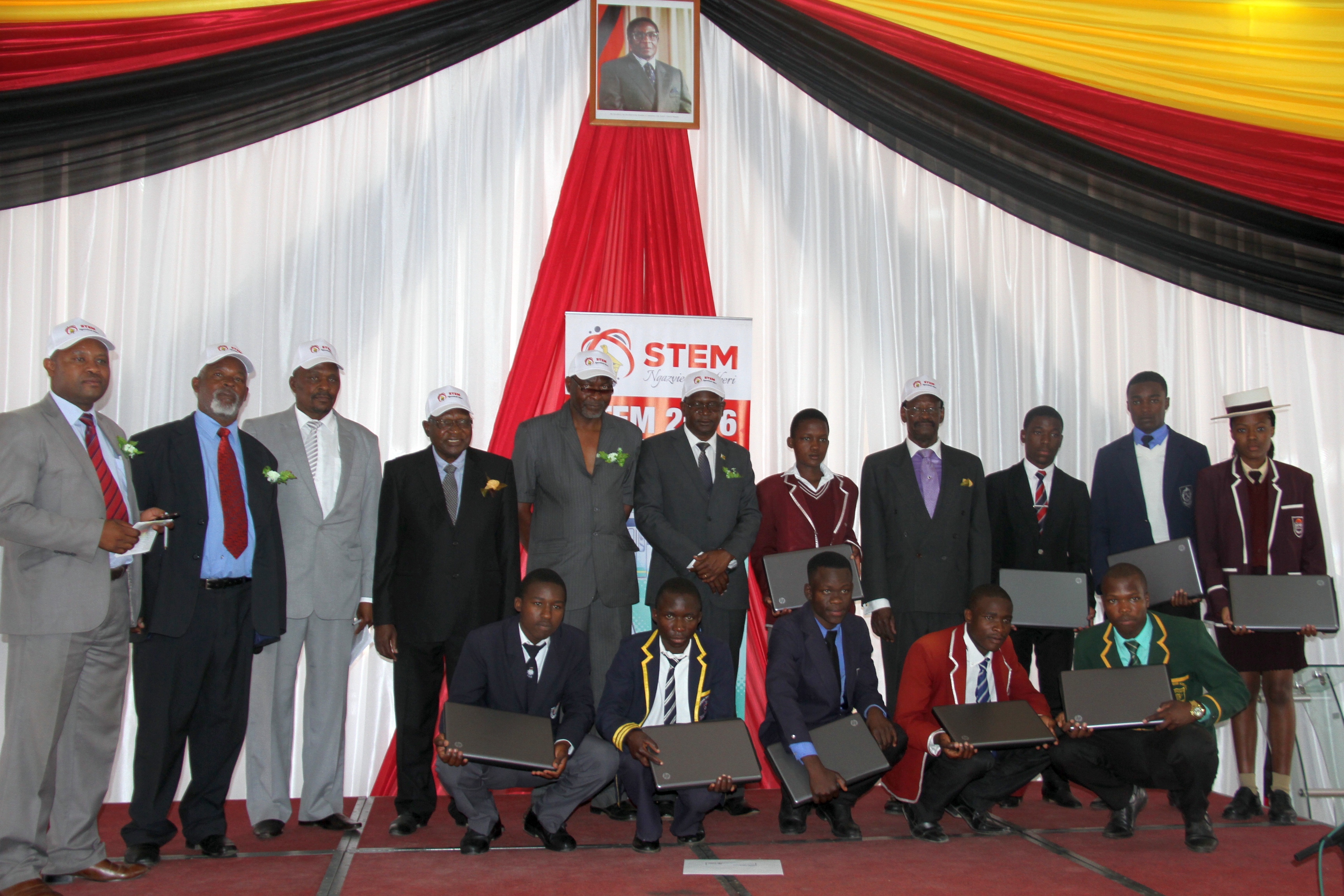 The colourful ceremony, which was held at the University’s Graduate School of Business Leadership, Faculty of Law and Faculty of Commerce Campus, saw 21 students from within the Province receiving various prizes including laptops and iPads, while one student, Ngonidzashe Maphosa of Anderson Adventist High School, won a trip to Silicon Valley in California, USA.

Speaking during the ceremony, guest of honour and Permanent Secretary in the Ministry of Higher and Tertiary Education Science and Technology Development, Ambassador, Dr Machivenyika Mapuranga, said his ministry launched the STEM Initiative in fulfilment of His Excellency, the President of the Republic of Zimbabwe, Cde R. G. Mugabe’s vision. The vision encapsulates that, ‘There is need to equip leaners with knowledge and values that guarantee economic growth and increased opportunities for employment creation; well-rounded citizens who are relevant nationally and competitive globally’.

Consequently, since its launch on the 27th of January 2016, the STEM Initiative has sought to motivate students who sat and passed their O’ Level examinations in 2015 with a Grade ‘C’ or better in Mathematics, Physics, Chemistry and Biology to take up STEM subjects at A’ Level.

Speaking at the same occasion, Midlands State University, Vice-Chancellor, Professor Ngwabi M Bhebe, highlighted that the recent opening of the University’s Faculty of Medicine and Faculty of Mining and Mineral Processing Engineering to compliment the Faculty of Science and Technology, which has been operational since the institution’s establishment in 1999, would bring about positive development in the Province and the nation at large.

‘We are excited that the opening of theses faculties has elevated the Province to levels that dovetail with the STEM Initiative in offering more meaningful development to the nation’, said Professor Bhebe.

Since its launch, 773 students from 39 schools have benefited from the STEM Initiative in the Midlands Province, with a total of $655 030 having been paid to date as tuition, levy, school and boarding fees.

The critical role played by STEM in driving economic growth, has widely being acknowledged the world over, with developed countries such as the USA and developing countries like China taking a leading role in promoting STEM disciplines as part of national growth and development efforts.

Among those who attended the prize handover ceremony were, Members of Parliament and Senators for the Midlands Province, Vice-Chancellors and Pro-Vice Chancellors, Principals of Polytechnics, Provincial Heads of Departments, the ZIMDEF CEO and Principal Directors, the Provincial Education Officer, Heads of schools, A’ Level pupils, junior parliamentarians, parents and guardians as well as members of the MSU community.

Let us know if you liked the post. That’s the only way we can improve.
Court Adjourned!
MSU Hosts Successful Open Day