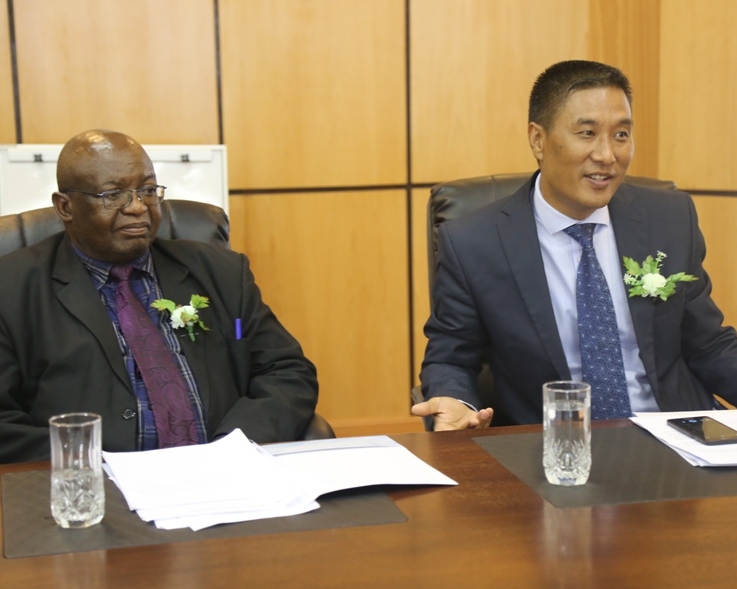 As part of efforts to get a first hand appreciation of activities at the country’s premier University while also setting a platform for collaborative partnerships, the Indian Ambassador to Zimbabwe, His Excellency Mr. R. Masakui visited Midlands State University on Wednesday, 18 January, 2017 for a familiarization tour of the institution

The Acting Vice Chancellor, Professor Ngonidzashe Muzvidziwa, the Acting Pro Vice Chancellor (Research and Academic Affairs) Professor Doreen Moyo and the Registrar, Mr. Erasmus Mupfiga were amongst senior members of the University Administration who welcomed Ambassador Masakui on his maiden visit to Midlands State University.  Also in attendance were the University Bursar, Mr Adam Zvandasara and the Librarian, Ms. Nyarai Chibanda who were joined by Deans of Faculties and Heads of Sections within the institution.

In his welcome remarks, the Midlands State University Acting Vice Chancellor, Professor Muzvidziwa highlighted that relations between Zimbabwe and India have always been cordial, noting that Ambassador Masakui’s visit was an extension of the warm relations between the two nations.

Addressing the gathering, Ambassador Masakui emphasized his interest in establishing collaborative partnerships between universities in India and Zimbabwean universities, noting that the Harare Institute of Technology had already signed Memoranda of Understanding with a number of institutions in India.

Ambassador Masakui stressed that he would leave no stone unturned in his quest to ensure that Midlands State University benefits from collaborative partnerships with institutions of higher learning in India in the fields of Information Communication Technology and Medicine among others.

As part of his fact finding and familiarization, Ambassador Masakui toured the Faculty of Medicine as well as the department of Chemical Technology. The Ambassador is expected to visit the University again at some point later this year.

Let us know if you liked the post. That’s the only way we can improve.
Harare Campus Library Opening
Exhibiting A Caring Touch