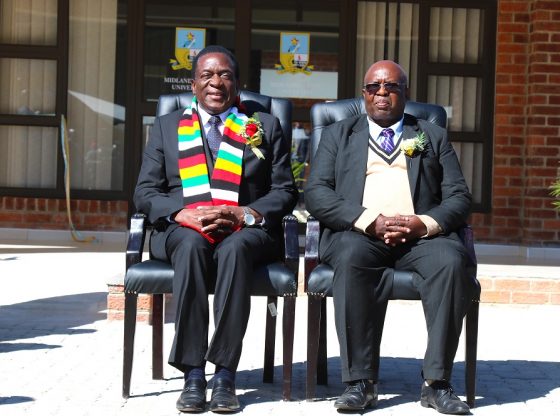 In a historic development that is set to transform the University’s research trajectory and set the tone for national research aspirations, His Excellency, the President of the Republic of Zimbabwe and Chancellor of all State Universities, Cde Emmerson Mnangagwa on Wednesday 6 June 2018 officially opened the Midlands State University Incubation Hub.

The Incubation Hub, is the first of five other such facilities that are expected to be established by August 2018 at selected state universities that are piloting the concept. The Incubation Hub, which was born out of the 100/200 day action plan initiated by Government through the Ministry of Higher Education, Science and Technology Development, is designed to support the country’s industrialisation and modernisation efforts.

In his address, the President, commended Midlands State University for ‘daring to venture into an idea, which is bound to have a far-reaching influence and impact in Zimbabwe’ and called on universities to ensure that research is transformative and provides practical solutions to real problems.

Research, ‘must speak to our problems, be relevant, usable, practical and transform our lives to advance economic development. Research and Development must further speak to our aspirations to modernize our agriculture, mining, manufacturing, tourism, health and education sectors, among others, said President Mnangagwa.

Incubation hubs, according to the Minister of Higher and Tertiary Education, Science and Technology, Development, Professor Amon Murwira are meant to ‘enable active knowledge transfer between researchers and business experts, on the one hand, and industry as well as government on the other hand’.

The incubation hub will not only benefit the University’s researchers and academia but also members of the public from all walks of life that have ideas and innovations that can contribute to socio-economic development at local, provincial and national levels.

In the words of three acclaimed poets on the day from Senga Primary School, who reiterated the new dispensation mantra, indeed ‘the Hub is Open for Business’.

Let us know if you liked the post. That’s the only way we can improve.
Call for Papers: Dams, Society and the Environment in Zimbabwe
Qualitative Research and Data Analysis Workshop