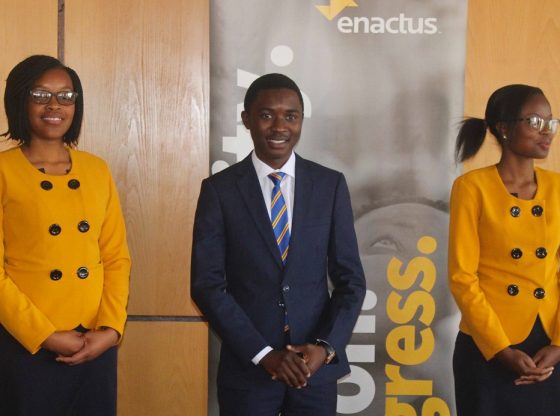 The Midlands State University Enactus Team’s preparations for their much-anticipated trip to Silicon Valley, USA have kicked off with the institution`s leadership optimistic that the team will raise the country`s flag high and bring back home the Global Championship. The institution launched a campaign dubbed, ‘MSU Road to Silicon Valley’, during the 2018 Boost Enactus Inaugural Conversation held at the University’s main campus in Gweru on the 15th of August 2018.

The campaign follows the success by the MSU Enactus Team in defending the National Championship title for the second time in a row at the competitions held in Harare on the 13th of July 2018. The Global Championship Competitions which will bring together university students, academics, researchers and members of the global business community among others will be held from the 9th to the 11th of October in Silicon Valley, California, United States of America.

Midlands State University Vice-Chancellor Professor Victor Muzvidziwa said the trip dovetails with His Excellency, the President of the Republic of Zimbabwe and Chancellor of MSU, Cde Emmerson Mnangagwa’s vision to establish industrial parks as a part of university incubation hubs for the socio-economic transformation of the country.

‘It is a vision that places universities at the centre of development projects and the country’s road to a middle-income economy by 2030. The incubation hub and the trip to Silicon Valley are giant steps in transforming the concept into reality and we believe we can do it,’ said Professor Muzvidziwa.

He said MSU Enactus has become a pace-setting team through its humility, confidence and dedication which have seen the students spending long hours working with lecturers, well-wishers and advisors and expressed optimism that the team will perform well.

“The skills you have learnt, social skills and entrepreneurial skills these are life-time skills that are bound to remain with you. That will be part of your character. … It gives you a certain knowledge, creates a certain attitude and gives you character. We are very confident that people who pass through this kind of exposure even in life will display that they are men and women of character, men and women who cannot be ignored, men and women who can make a difference in their communities, a difference starting with yourself, your families and eventually the country at large,” he added.

MSU Executive Dean of Students, Mr Isheunesu Chaka said the Students Affairs Division provides a balance to complement the role played by the academic side through character building initiatives such as Enactus. Currently, Enactus has students from eight of the nine faculties and students from the Faculty of Medicine are expected to join their counterparts soon.

‘As Students Affairs we are proud to say that the vision and mission of the institution to produce a well-rounded graduate is taking shape and the Enactus students are proof of that vision so we are working with what the University is striving for,’ said Mr Chaka.

The trip to Silicon Valley comes at a time when MSU students from the Faculty of Law attended a Moot Court Competition in Geneva, Switzerland in which they emerged as number one in the Heads of Argument Category. During the World Human Rights Competitions the same team finished 8th in the Oral Category making it the only academic institution from the African continent to make it to the top ten global champions. The Enactus World Cup provides university students with a platform to showcase how entrepreneurship action and social innovation is transforming lives as well as creating a better future for the world.

Let us know if you liked the post. That’s the only way we can improve.
MSU 2018 Open Day
MSU Welcomes New Students