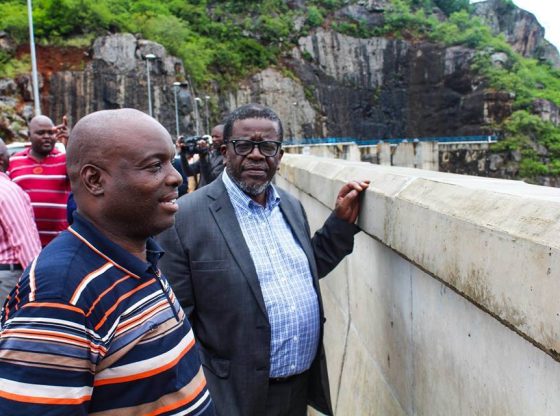 The Midlands State University has attended the Tugwi-Mukosi Development Project Site meeting, which was held at the dam site in Masvingo on Thursday 14 February 2019. The meeting was chaired by the Deputy Chief Secretary to the President and Cabinet Mr Justin Mupamhanga.

According to Mr Mupamhanga, the purpose of the visit to the dam was to have an appreciation of the physical layout so that relevant government ministries can begin preparations to implement projects with a clear picture of the site.

‘Government is aware that the Tugwi-Mukosi Project should uplift the livelihoods of the local communities in line with the resolutions from the council of ministers in charge of this project. We also want to make sure that the water in the dam is put to good use for the benefit of the local communities and the country at large. As I speak the ministers will be coming here within the next two weeks then they will guide us on which way to go from here so that we fulfil the wishes of the people of Zimbabwe,’ he said.

The permanent secretaries from various government ministries, representatives of parastatals and the local leadership also participated in the tour. Permanent Secretary in the Ministry of Energy and Power Development Engineer Gloria Magongo said her Ministry will construct a 15 megawatts hydroelectric power plant for which a private contractor has been given a license.

‘The project is now coming to full feasibility and we will be coming back with developers to look at the place and then they will give us the final plan for implementation. A lot of work has already been done from the time of the design of the dam because it was designed to incorporate the power plant into the dam,’ said Engineer Magongo.

Some of the projects identified for the dam include fisheries and crocodile farming, mini-hydropower generation and other energy projects, construction of hotels, holiday homes, lodges, cultural villages, restaurants, and a theme park. Tugwi Mukosi Dam which has a holding capacity of 1,8 million cubic metres of water has been declared a special economic zone and stakeholder consultations are currently underway to identify an economic operator who will formally initiate the process of applying for a Special Economic Zone Licence from the Zimbabwe Special Economic Zones Authority (ZIMESA).

Let us know if you liked the post. That’s the only way we can improve.
﻿Lynette Ndlovu Appointed as the First Ever FAMSA Female President
MSU Secures a Key Engineering Research Grant