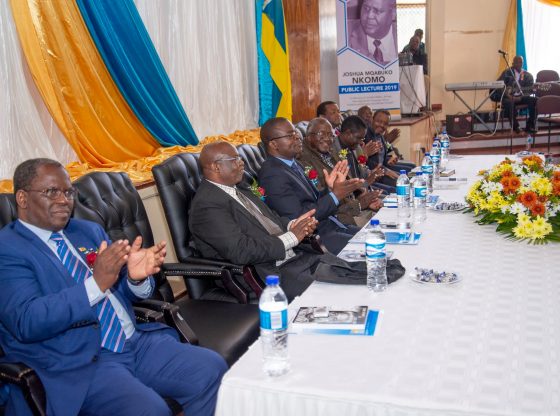 A memorial academic lecture in honour of the late Vice President of the Republic of Zimbabwe, Dr Joshua Mqabuko Nyongolo Nkomo has been held at the Midlands State University`s main campus in Gweru amid calls on the nation to take after his visionary and selfless leadership.

The lecture which was the 4th edition was organised by the Joshua Nkomo Legacy Foundation in conjunction with the Midlands State University. The lecture entitled, “In Memory of Umdala Wethu, African Development University, Africa Intellectuals/Scholars and African Futures,” was delivered by well-known South African based academic, author, researcher and editor Professor Sabelo Gatsheni Ndlovu. The lecture highlighted among other issues the reasons why “Umdala Wethu” should be remembered, the world of Joshua Nkomo and its key moments, African National Projects and African Future.

Prof. Ndlovu said the existence of Pan Africanism is due to the hard work of Father Zimbabwe and his fellow comrades from other countries who fought colonialism to pave way for nationalism, indigenisation, humanity, the dignity and elimination of inferiority complex among black people.

“In the book which I edited in 2017, entitled “Joshua Nkomo of Zimbabwe: Context, Power and Memory”, what emerges from that book is that Nkomo was a nationalist diplomat, Nkomo was a philosopher of liberation, Nkomo was an advocate of land reclamation. I wonder how else we can understand Nkomo`s sacrifices, struggles and compromises except as a person who was on fire for justice,” he said.

Higher and Tertiary Education, Science and Technology Development Minister, Professor Amon Murirwa, told delegates during the public lecture that Father Zimbabwe gave power to the people to enable them to work and make the country a great nation.

“It is a lesson that we learn from Joshua Mqabuko Nkomo that no universal selfishness can bring social good to all. Let`s be selfless like Father Zimbabwe,” said Prof Murwira.

Let us know if you liked the post. That’s the only way we can improve.
MSU PALs Join Global World Changers at the Women Deliver 2019 Conference in Vancouver Canada
Dr Mehlana Recognised as One of the Best Chemists Globally