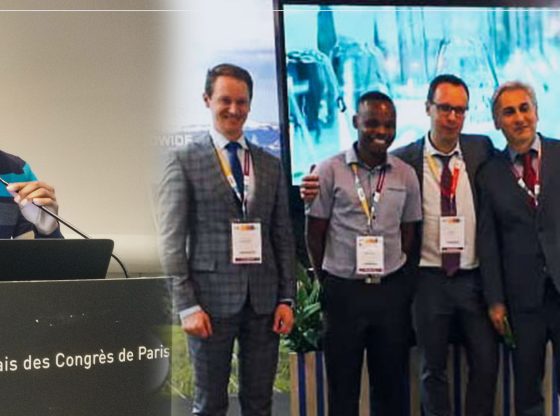 Midlands State University lecturer and leading researcher in the Chemical Technology Department, Dr Gift Mehlana continues to raise both the MSU and Zimbabwe flag high on the global research landscape.
The award-winning FLAIR Research Fellow, was recently in Paris, France, where he attended the 100th anniversary of the International Union of Pure and Applied Chemistry (IUPAC) which coincided with 150 years of the existence of the Periodic Table. The celebrations, which were held from the 5th to the 12th of July, 2019 brought together Nobel Prize winners as well as other top global researchers in Chemistry.
During the celebrations, which ran under the theme, ‘Frontiers in Chemistry: Let’s create our future! 100 years with IUPAC’, Dr Mehlana met the IUPAC President and was also interviewed by one of Europe`s biggest fertiliser producing companies, PhosAgro which expressed interest in learning more about Midlands State University.
Dr Mehlana believes his participation at the high-level event and many other such international events, will not only position the University and the country on the global map but will also inspire students who are studying at MSU.
‘For students, this is a good motivator and they are likely to become more interested in working towards achieving higher levels. Most of them think coming here (MSU) is all about learning and then you get your degree and go, but now they are able to see another dimension,’ he said.
Executive Dean in the Faculty of Science and Technology, Dr Action Nechibvute applauded efforts by Dr Mehlana to mentor young people, over and above collaborating with international researchers.
‘He is mentoring a lot of young people among them, Piwai Shoko whose research has been acknowledged in Europe. She has come up with new material which never existed before. The idea is for the students to do science honestly and to make our Chemical Technology Department host the best researches so as to compete globally,’ said Dr Nechibvute.
The Faculty is already getting enquiries for PhD supervisors from as far as Sri Lanka where three students with book prizes from their universities want to be supervised by Dr Mehlana. Meanwhile, the University will in the next few days receive research equipment worth US $120 000 from Bruker Corporation as part of the FLAIR award won by Dr Mehlana.

Let us know if you liked the post. That’s the only way we can improve.
Our Education Must Work for Us: Prof. Murwira
Marketing Management Students Donate Creative Arts Studio Equipment