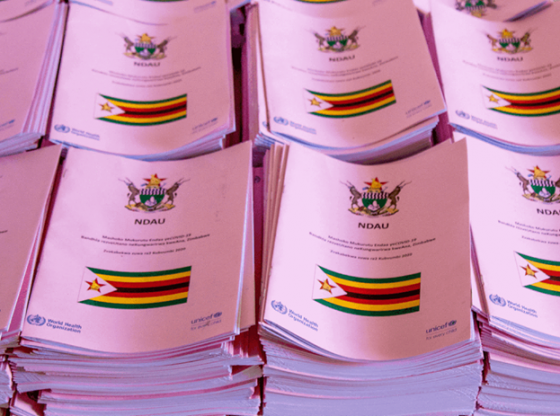 As part of national efforts to raise awareness on the spread of the coronavirus (COVID-19), Midlands State University Press has begun distribution of COVID-19 information booklets. To date, a total of 678 000 booklets have been printed at the behest of the National COVID-19 Taskforce and are available in all the country’s 16 officially recognised languages including braille and sign language.

Speaking during one of the dispatch exercises, MSU Press Director, Mr A Mukwembi said the material was part of the Government’s efforts to fight the spread of COVID-19 by educating citizens about the virus in their first languages.

“Today we have begun dispatching the booklets to provincial information officers representing all the 10 provinces. Our quantities are in keeping with the language demography across the nation. We are giving 30 000 copies in English to every province and the rest will be distributed on a pro-rata basis in line with the popular language in a region,” he said.

Receiving the booklets on behalf of the Midlands Province, the Provincial Information Officer, Mr Edwin Moyo said the material will be distributed throughout the province.

“We have a task force at the district level and we will ensure that these booklets are issued to all parts of the province and in their language patterns”, he said.

Also present during the distribution, MSU Language Institute Director, Professor Wiseman Magwa noted that every effort had been made to ensure that every citizen including the visually impaired, has access to COVID-19 information.

“We have professional translators who have worked to translate the content from English to the 16 indigenous languages including sign language. We have also included booklets in braille despite it not being a language. We intend to assist every citizen including the visually impaired,” said Professor Magwa.

With the fight against COVID-19 far from being over, it is crucial to get important COVID-19 messaging out far and wide and to ensure that it reaches many people as quickly as possible and to this end, 5 of the countries 10 provinces have already collected their respective materials with the remaining provinces expected to collect in the coming days.

Let us know if you liked the post. That’s the only way we can improve.
Finance and Economic Development Minister Visits MSU
MSU Medical Team Makes Historic Delivery