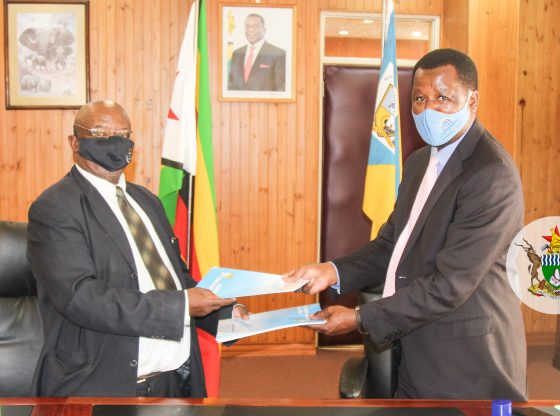 As part of the country’s green climate initiative, the Ministry of Environment, Climate, Tourism and Hospitality Industry has signed a Partnership Agreement with the Midlands State University. The signing ceremony took place on the 25th of March 2021 at the University’s Gweru Main Campus.

Realising the importance of mainstreaming climate change into relevant development planning frameworks, the Ministry launched a Climate Change Mainstreaming Training and Research Programme which will see seven universities rolling out the programme. The signing of the Partnership Agreement marks the commencement of the implementation phase of the programme that will see MSU and other participating universities facilitating training and research through a Climate Change Research module for selected members of the Provincial Development Committees (PDCs) who are expected to spearhead climate change mainstreaming at the provincial level. Under this programme, Midlands State University, through the Faculty of Agriculture, Environment and Natural Resources Management will initially train five members of the Midlands Provincial Development Committee.

Speaking at the signing ceremony, the Permanent Secretary in the Ministry, Mr Munesu Munodawafa highlighted that climate change adaptation is a national priority, hence it should be integrated into national and provincial level development planning processes.

“The Ministry has secured funding for this project from the Green Climate Fund. To assist us in successfully implementing this Climate Change Training and Research programme, it is imperative to follow the National Adaptation Plan (NAP) Process as provided for, by the United Nations Framework Convention on Climate Change (UNFCCC). The NAP assists us to conduct a comprehensive medium and long-term climate adaptation planning and it is also a basis for us to secure funding for future Climate change adaptation,” said Mr Munodawafa.

The Permanent Secretary commended the second Republic for involving universities in the mainstream economy, a development which has resulted in fruitful collaborations and partnerships in research and development. He noted that Climate Change is a global phenomenon and as such, universities play a pivotal role through carrying out ground-breaking research on climate adaptation activities as well as providing relevant and adequately trained human capital.

The Midlands State University Vice-Chancellor, Professor Victor Ngonidzashe Muzvidziwa applauded the Ministry for mainstreaming climate change and securing funding for the training and research project. He added that the effects of climate change are far-reaching, which is precisely why the Government through the Ministry has prioritised Environmental Protection, Climate Resilience and Natural Resources Management under the current National Development Strategy (NDS 1).

“Our role as institutions of higher learning and leaders in knowledge creation, innovation and research is to ensure that we contribute to the attainment of national development goals. Through our core functions of teaching and training, I believe we can leverage our expertise and play an active role in strengthening capacity building and awareness on climate change adaptation and mitigation through the Climate Change Mainstreaming Research Programme that we are activating today,” he remarked.

Professor Muzvidziwa further said that the partnership between the Ministry of Environment, Climate Change, Tourism and Hospitality and the Midlands State University as well as other local universities will not only see the integration of climate change in development planning frameworks but will also help local communities to sustainably manage the environment for the benefit of current and future generations.

The Vice-Chancellor pledged the University’s commitment to ensuring that Zimbabwe becomes a green, middle-income economy by 2030.

Midlands State University Pro Vice-Chancellor, Business, Innovation and Enterprise Development, Professor Grace Mugumbate also weighed in saying the Partnership Agreement was the birth of many collaborations and partnerships in research and other activities between the Ministry and the University.

Let us know if you liked the post. That’s the only way we can improve.
MSU Gears Towards Pharmaceuticals Production
UPDATED ROADMAP FOR 2021