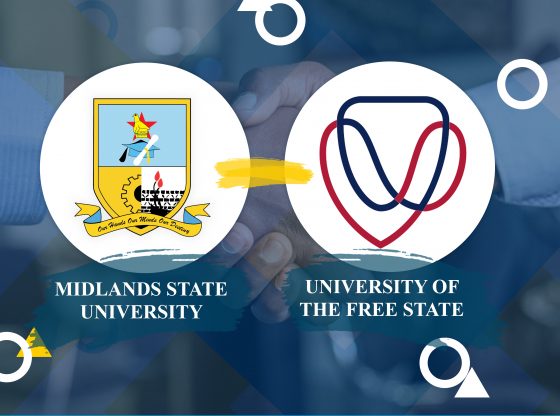 True to its commitment to internationalisation, Thursday, 24 June 2021 saw Midlands State University (MSU) signing a Memorandum of Understanding (MOU) with the University of Free State (UFS) in a virtual ceremony. The MOU marked the beginning of a long-term partnership that will strengthen the two institutions’ cooperation in their research and academic pursuits.

The collaboration initiated by the signing of the MOU is expected to stimulate interdisciplinary research and innovations that will create new value chains to enrich the two universities and their respective communities. The two institutions envisage the partnership will quickly assume a research-intensive character with a focus on livelihoods, agriculture, water and other areas of common interest.

Speaking during the signing ceremony, Midlands State University Vice-Chancellor, Professor V N Muzvidziwa said, “At MSU, we believe in engagements, we believe in Ubuntu principles and in Africa’s natural endowments. We share the notion that the continent of Africa has a deep reservoir of partially exploited social, economic and environmental diversity, which when intelligently synchronized, the continent will switch over to a sustainable development model. The education system in Africa must stand ready to collaboratively work towards championing progress in Africa in line with the UN SDGs and Africa Agenda 2063. Together, we can make the pathway to the AFRICA WE WANT clearer and more exciting.”

In his remarks, UFS Vice-Chancellor and Rector, Professor Francis Petersen who signed the MOU on behalf of the University expressed optimism about the strategic partnership as he called for solidarity between the two universities in order to enable innovative co-creation that will change lives for the better in the two countries namely Zimbabwe and South Africa. He went further to state that UFS’s strategic drive to marry Artificial Intelligence (AI) to human endeavour and creativity closely mirrored Zimbabwe’s Education 5.0 philosophy.

Let us know if you liked the post. That’s the only way we can improve.
Unki Mine Delegation Visits MSU
The Dyke Journal: Call for Papers