MSU Participates at the 9th Edition of the National Disability Expo 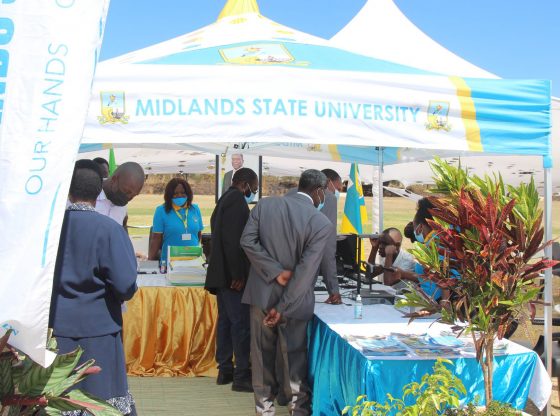 Uncategorized |
Midlands State University took part in the 9th Edition of the National Disability Expo which was held from the 11th to the 13th of October 2021 at Gweru Sports Club. The Expo which ran under the theme, ‘Disability mainstreaming and inclusion for a prosperous and empowered society, which leaves no one behind’ was officially opened by His Excellency, the President, Cde Emmerson Mnangagwa on Wednesday the 13th of October 2021.
Speaking while officially opening the Expo, President Mnangagwa, said Government will ensure that people with disabilities are not left behind as Zimbabwe marches towards Vision 2030.
The Midlands State University exhibition was led by the Disability Resource Centre and showcased various technologies and resources that are used to support teaching and learning among members of the University community with different disabilities.
Since its inception, the MSU Disability Resource Centre has been actively involved in mainstreaming disability rights including the right to education at both institutional and national levels and the Expo was an opportunity to correct several misconceptions regarding people with disabilities among members of the public from all walks of life who visited the University stand during the 3-day event.
The Expo drew together several participants from across the country that included non-governmental organisations, various government departments, interest groups, institutions and organisations that represent and work with people with disabilities.

Let us know if you liked the post. That’s the only way we can improve.
MSU to Host Africa Continental Free Trade Area Conference
Research Council Tours MSU Zvishavane Campus