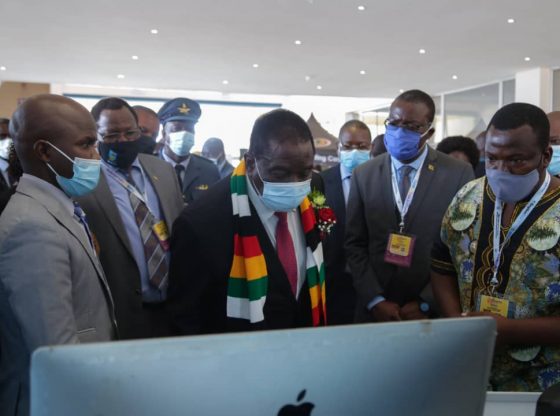 Featured,News,zvishavane |
The Midlands State University’s Media, Communication, Film and Theatre Arts Department is now a veritable film school as evidenced by its performance at the inaugural Varsity Film Expo, recently held in Bulawayo.
The National University of Science and Technology (NUST) hosted the Expo from the 6th to the 8th of December 2021 and His Excellency, President Cde Dr E. D. Mnangagwa was the guest of honour.
The MSU team won two awards. The first, a trophy for being second runners up in the film production category for their timely documentary entitled “Pfumvudza.” The second, a DSTv decoder for the best exhibition stand.
In his speech, President Mnangagwa said the government will continue to provide resources for the Media and Arts sector, particularly to support emerging talent in the Film Industry.
“At this stage of our country’s development epoch, film and movies should be deployed to motivate our people to be more, and to do more, through increased production and productivity. The industry must further help to convey the true story of our great country by projecting a positive national image,” the President said.
He further emphasised that film should be the driving force towards the creation of a ‘Zimbabwean we want’.
The ‘Zimbabwe with Love’ initiative which seeks to use film and other media to promote destination Zimbabwe, will undoubtedly go a long way in fostering win-win partnerships and help attract investments into our country. Informed by our mantra ‘Zimbabwe is open for business’ and ‘Nyika inovakwa nevene vayo’.
The President further emphasised the need to support the local film industry through various stakeholders, including universities.
The Film Expo, which ran under the theme, ‘Vivid: Amplifying Sustainable Development Goals using Film and Digital Media’, brought together students, lecturers, industry experts and government officials to discuss and find ways of collaborating in the production and distribution of content for the attainment of United Nations Sustainable Development Goals.
Dr O. Ureke who led the MSU delegation received the award from the President on behalf of the University.
Commenting on the University’s participation at the Expo, Chairperson of the Department of Media, Communication, Film and Theatre Arts, Dr Vhutuza said, this was just the beginning of greater things to come for the department.
“Bagging of a floating trophy and a TV decoder at the Varsity Film Expo graced by His Excellency is just the beginning of greater things to come for the Department of Media, Communication, Film and Theatre Arts. With the support of the University Management and wider University community, the department is poised for phenomenal growth and poised to conquer the Zimbabwean and African Film and Theatre spaces”, said Dr Vhutuza, the Chairperson of the department.
The Department of Media, Communication, Film and Theatre Arts documentary film that scooped an award was shot by students that included Tafadzwa Potisi, Blessing Ruguva and Brandon Dambo. Other members of the production team were Dr T. Mashingaidze, who was the concept developer, Godknows Chera the producer, while Brighton Munaku and Scrah Mdala were the editors. Some of the student films that were screened at the Varsity Expo included ‘Tsvakai’ a short fiction film starring Tafadzwa Mavhura and Brighton Munaku, Chamu Wekutsvaga Pablo and directed by Godknows Chera.
The Varsity Expo was attended by various state universities and colleges that included the University of Zimbabwe, Great Zimbabwe University (GZU), Lupane State University (LSU), Chinhoyi University of Science and Technology (CUT), Solusi University, Midlands State University, Hillside Teachers College and many other tertiary institutions.

Let us know if you liked the post. That’s the only way we can improve.
First Cohort of MSU Medical Students Graduates
PDC Masvingo Supports Tugwi-Mukosi Research Institute Move