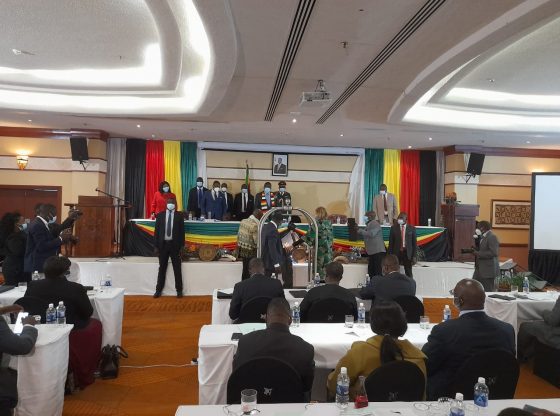 News |
President of the Republic of Zimbabwe, His Excellency Dr Emmerson Dambudzo Mnangagwa applauded the Midlands State University National Language Institute for its role in the meticulous translation of key national documents such as the Zimbabwe constitution and the National Development Strategy into the country’s indigenous languages.
“My government has ensured the translation of national documents such as the constitution, National Development Strategy1 (NDS1) and COVID-19 information, education and other communication materials into the 16 national languages and this was achieved through the Midlands State University National Language Institute,” the President said.
He said this while officially opening the inaugural National Languages Conference on the 15th of June 2022 at Elephant Hills Hotel in Victoria Falls.
The President said that the government is committed to keeping Zimbabwe’s languages alive in their diversity since they are pivotal in the national development agenda aimed at leaving no one and no place behind.
Since its inception, the MSUNLI has proved to be an international powerhouse of language services in Zimbabwe.
The President underscored the significance of national languages in the development of Zimbabwe.
“In the present development agenda, which is guided by our development philosophy, ‘nyika inovakwa ne vene vayo’, indigenous languages must thus, be effectively deployed as vital cogs in the formulation, implementation and monitoring of all national development policies, programs and activities,” said the President.
Professor Wiseman Magwa, the Executive Director of the Midlands State University National Language Institute said that the institute is ready for the task of providing language services not only to government but also to the private sector and individuals.

Let us know if you liked the post. That’s the only way we can improve.
SAYWHAT OPEN CALL FOR ESSAYS
MSU receives Satellite Ground Station Kit from Space Generation Council