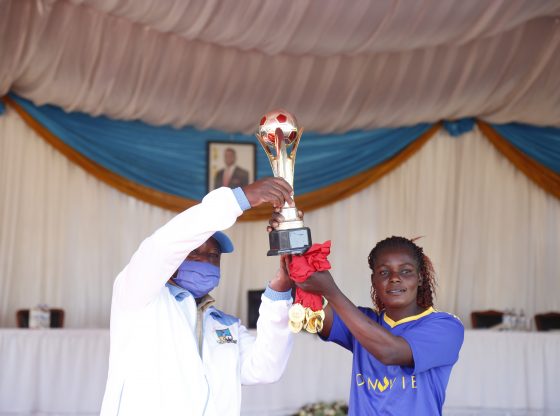 News |
The 11th edition of the Chancellor of Zimbabwe State Universities Staff Games ended on a high note with the hosts, the Midlands State University, winning the overall best sporting institution at the annual sports extravaganza.
MSU bagged 10 gold medals, eight silver and six bronze.
Running under the theme “Universities Human Capital, a tool for embracing Education 5.0,” the games began on the 4th of July 2022 and ran for a full week.
The sporting showcase came to a successful conclusion on Saturday the 8th of July 2022 with the presentation of awards and trophies by the Higher and Tertiary Education, Innovation, Science and Technology Development Deputy Minister Raymond Machingura, at the MSU Gweru Campus Sports Pavilion.
In his address, the Deputy Minister expressed delight at the success of the 11th edition of the Chancellor’s Games 2022 and congratulated the participating teams for the competitive sporting performance.
“I am humbled to stand before you today, representing the Minister of Higher and Tertiary Education, Innovation, Science and Technology Development. I would like you to know that Honourable Minister Murwira supports these games from the heart.
“It was wonderful to see all the people not only being positive and cheerful but also being tremendously proactive,” he said.
The then Acting Vice Chancellor, Professor Grace Mugumbate, thanked the Ministry for its sustained support of sporting activities in universities.
“I stand here today on behalf of the Vice-Chancellor of MSU to welcome you all. The Ministry of Higher and Tertiary Education, Innovation, Science and Technology Development has been supportive of the staff games from the first edition to the eleventh.
“Sports provide social interaction which is necessary for holistic development,” said Professor Mugumbate.
The 12th edition of the Chancellor’s Staff Games will be held at the National University of Science and Technology (NUST).
Staff members competed in several sporting disciplines including chess, soccer, netball, basketball, tug or war, snooker, volleyball and darts.
State Universities that participated in the Chancellor’s Games included MSU, Great Zimbabwe University, University of Zimbabwe, Chinhoyi University Technology, National University of Science and Technology, Bindura University of Science Education, Gwanda State University, and Lupane State University.
The Chancellor’s games are an annual sporting tournament held in honor of the Chancellor of State Universities and the President of the Republic of Zimbabwe, His Excellency, Cde Emmerson Dambudzo Mnangagwa for his contribution to higher education in Zimbabwe.

Let us know if you liked the post. That’s the only way we can improve.
GZU SDG-AfCFTA Certification Advert
TOURISM CALL FOR PAPERS