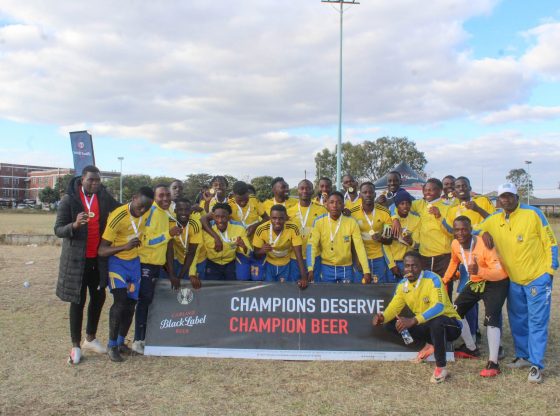 News |
Midlands State University’s (MSU) star-studded teams swept gold medals in different categories, registering wins in both women’s and men’s soccer, pool, table tennis, handball and athletics, at the five-day Carling Black Label, Zimbabwe Tertiary Institutions Sports Union (ZTISU) games that started on Tuesday the 12th of July at White City Stadium in Bulawayo.
The MSU men’s soccer team was also awarded the best-dressed team, with their forward, Gerald Sibanda winning the top goal scorer trophy. Another MSU soccer player, Poly Shoko was crowned player of the tournament, and Mr Chasten Ngondonga received the coach of the tournament award.
The games came to a close with the presentation of prizes and trophies to the Champions at Hillside Teachers College in Bulawayo on the 16th of July 2022.
Delta Beverages ‘Carling Black Label Brand sponsored the awards.
The ZITISU games ran under the theme ‘Together We Can Archive The Extra Ordinary Through Sports. ’
ZITISU are sporting competitions composed of three tertiary institutions sporting associations namely Zimbabwe University Sports Association (ZUSA) representing universities, Zimbabwe Teachers’ Colleges Sports Association (ZITCOSA) as well as the Tertiary Education Sports Association of Zimbabwe (TESAZ) for polytechnics.
The ZITISU winning teams will represent Zimbabwe at the upcoming CUCSA games slated for 28 August to September 3 2022 in Lilongwe, Malawi.