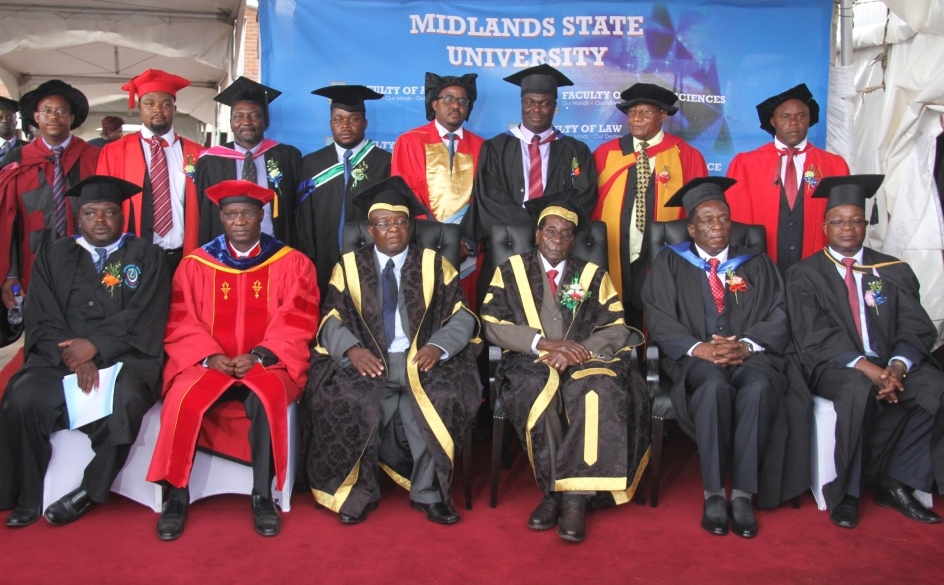 It was all pomp and funfair as a record 4 708 students were conferred with various degrees by His Excellency, the President of the Republic of Zimbabwe, and Chancellor of the Midlands State University, Cde Robert Gabriel Mugabe, at a colourful ceremony held in the University’s Multi-purpose Hall, on Friday the 25th of Novembers 2016.

In an impressive feat that speaks of the great strides being made by the institution in the provision of quality higher education and perhaps further to that, its relentless commitment to gender equality and equity in its student admissions; of the graduating total, 2 349 were female, while the remaining 2 359 were male. A development, which shows that the gender gap continues to reduce amongst the University student population.

The historic 16th congregation of the Midlands State University’s graduation ceremony, also witnessed for the first time in Zimbabwe’s post-independence legal history, 22 Master of Laws in Constitutional and Human Rights Law graduands, graduating. A total of 720 students also graduated with postgraduate qualifications, with 713 attaining Masters Degrees and 7 attaining PhDs. Out of the 7 PhD graduates, it was impressive to note that 5 of them, including MSU’s first female PhD graduate, were supervised by renowned historian and MSU founding Vice-Chancellor, Professor Emeritus Ngwabi Bhebe.

‘We are deeply indebted to Professor Emeritus Ngwabi Bhebe, the founding Vice Chancellor who has been a visionary captain of the ship during the growth and expansion of the present day multi-campus Midlands State University. Additionally, without the sterling helicopter view of Mr Canaan Dube, the founding MSU Council Chairperson and his committed councillors, MSU would not have come this far’, said Professor Muzvidziwa.

Addressing graduates, the Acting Vice-Chancellor, challenged them to use the knowledge they have acquired to not only benefit themselves, but also their families and the nation at large.

‘To our dear graduands, I say, as you leave behind the hallowed walls of the Midlands State University and stride into the world, the onus is upon you to ensure that the knowledge you have acquired benefits not only yourselves and your families but the nation and indeed, the world at large’, said Professor Muzvidziwa.

Distinguished guests who graced this year’s 16th graduation included the Vice President, Cde Emmerson Mnangagwa, the Minister of Higher and Tertiary Education, Science Technology and Development, Professor Jonathan Moyo, his deputy, Dr Godfrey Gandawa, the Permanent Secretary for of Higher and Tertiary Education Science and Technology Development, Ambassador Dr Machivenyika Mapuranga, , the Principal Secretary for the Swaziland Ministry of Education and Training, Mr Pat Muir, the Acting MSU Chairman of Council, Eng Caleb Makwiranzou, MSU Pro-Vice-Chancellors, Professor Kadmiel Wekwete and Professor A Viriri, Pro Vice-Chancellor of the MSU-Manicaland College of Applied Sciences, Professor A Chawanda, Minister of State in the Midlands Province, Cde Jason Machaya and other senior government officials, Vice-Chancellors from sister universities, members of the University Council and Senate, captains of industry, parents and guardians as well as members of the University Community.

Let us know if you liked the post. That’s the only way we can improve.
Standing Proudly Among Africa’s finest!
Madzimbabwe 2016: It’s A Wrap!