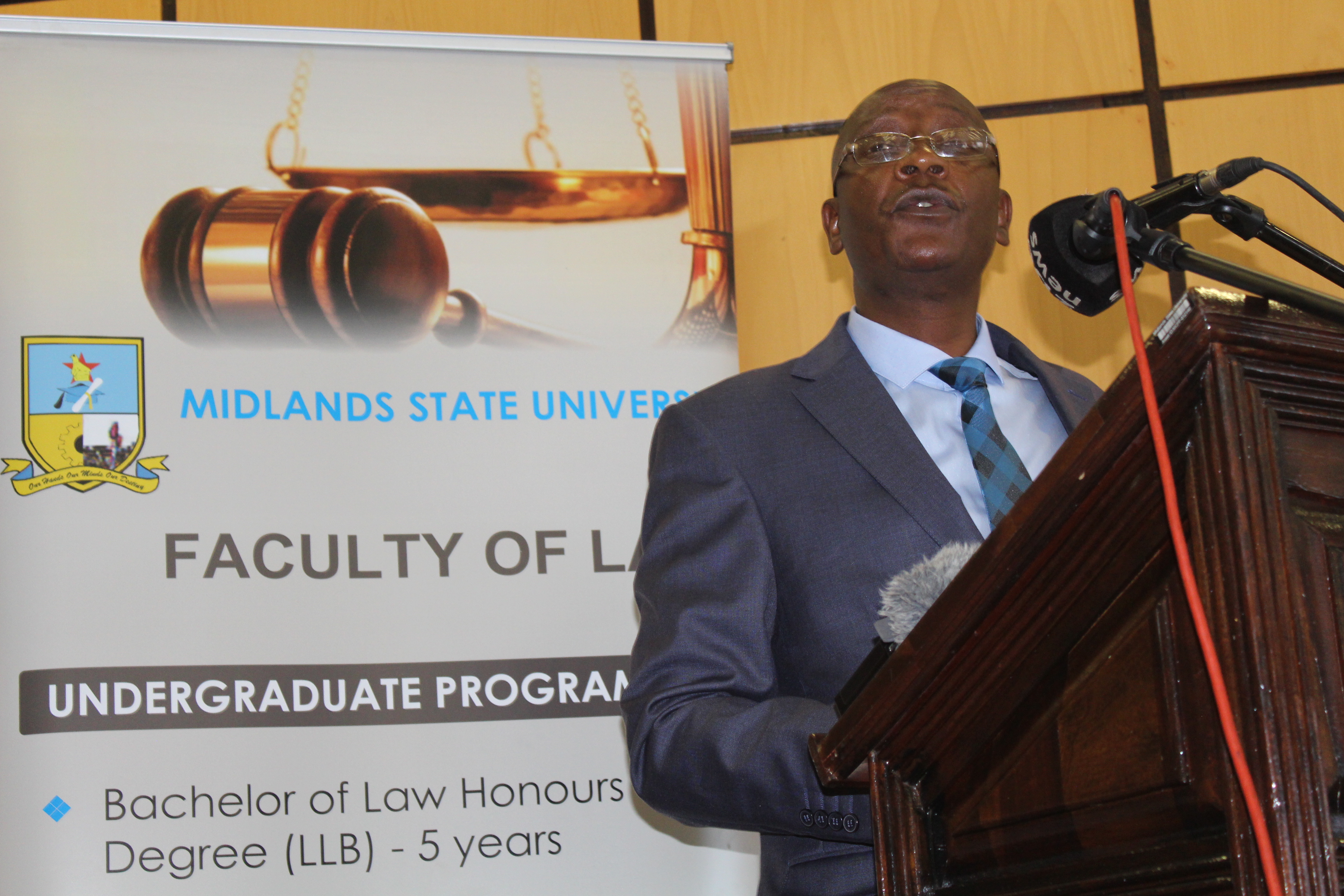 As part of efforts to increase access to justice through its contribution to human capital development in the legal fraternity in Zimbabwe, Midlands State University (MSU), through the Faculty of Law, officially launched the first Diploma in Paralegal Studies in the country on Wednesday, the 7th of March 2018.

Working together with the Ministry of Justice, Legal and Parliamentary Affairs, the Judicial Services Commission, the Law Society of Zimbabwe, Legal non-governmental organizations, donors and Midlands State University, TRACE identified a number of challenges in improving access to justice in Zimbabwe, which include among others, lack of affordable and inclusive legal access, reliance on unofficial paralegals and lack of formal training among paralegals.

Having satisfied the University requirements to offer the diploma programme in partnership with the Transparency, Responsiveness, Accountability and Citizen Engagement (TRACE), the Faculty of Law enrolled the first intake of 28 students on the 24th of July 2017. TRACE is a DFID-led multi donor programme in partnership with the United Kingdom, Australia, the Netherlands, Denmark and Ireland which aims to promote human rights and equality, access to justice for the marginalised and transparency and citizen engagement in the use of public resources.  The 18-month diploma, which is a specialised programme for stakeholders in the justice delivery system, focuses on enhancing the competencies of life-long learners who are already employed in various organizations that offer legal aid to the most vulnerable members of the society. The launch falls very much in line with the Ministry of Justice and Legal Parliamentary Affairs’ mission which seeks to promote an effective and efficient justice delivery system in Zimbabwe.

In his opening remarks, the MSU Acting Vice Chancellor, Professor V N Muzvidziwa, underscored the objectives of the Diploma, which was consolidated after wide consultations with stakeholders in the justice delivery system, following which an Advisory Board was set up to bridge the gap between the curriculum and stakeholder needs. “The Diploma seeks to improve access to justice by training a pool of paralegals with requisite skills and knowledge in paralegal work as well as enhance efficiency in the justice delivery system through specialized training for courts’ Help-Desk personnel, Government departments and civil society practitioners. Additionally, it also provides basic legal knowledge to other professionals who have an interest in the law. The Diploma seeks to identify contemporary issues and apply research skills to solve problems in their specialized fields and to consolidate and formalize paralegal education training in Zimbabwe as a basis for further legal education.” said Professor Muzvidziwa.

Speaking at the same occasion, the Guest of Honour, the Minister of Justice and Legal Parliamentary Affairs, Honorable Ziyambi Ziyambi, commended TRACE and MSU for successfully launching the critical programme that plugs the gap that has been in the legal system. “My Ministry is pleased that the Faculty of Law at Midlands State University in partnership with TRACE has taken the first initiative to fill the gap created by the lack of formal qualification through offering a Diploma in Paralegal Studies. It is therefore our hope as a Ministry that the Diploma programme will produce a cadre that will augment access to justice for our citizens, particularly women, children, persons with disabilities, the poor, and other vulnerable, and marginalized groups.”

The launch was graced by TRACE representative, Mrs Annabel Gerry, representative of Ambassadors of the partnering countries, Ambassador of the Kingdom of Netherlands, Her Excellency, Mrs Barbara Van Hellenmond, the Deputy Chairperson of the Advisory Board, Mrs Abigal Matsayi, Advisory Board members, MSU Pro Vice Chancellor Research and Academic Affairs, Professor D Z Moyo, the MSU founding Vice Chancellor, Professor Emeritus N M Bhebe, senior people from the legal fraternity who included the Secretary for the Judicial Services Commission, Mr Walter Chikwanha, Justice Custom Kachambwa, MSU Principal of Officers, the Executive Dean of Law, Dr G Manyatera, members of staff from the Law Faculty as well as the first cohort of students who enrolled for the Diploma programme among other members of the University Community.

Let us know if you liked the post. That’s the only way we can improve.
Midlands State University to Partner Ben-Gurion University
MSU Corporate Golf Tournament a success