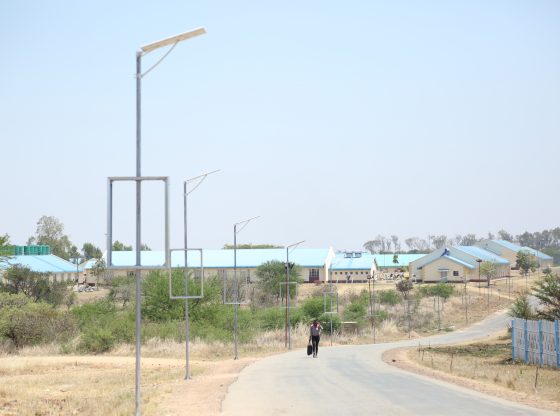 Midlands State University has commissioned a solar lighting system, a project that was undertaken in partnership with ZB Bank to improve lighting along the road leading from the institution’s Gweru Main Campus to the halls of residence namely China and Japan.

The pilot project kicked off with the installation of ten lights and later an additional twenty lights were installed at a total cost of $50 000 dollars.

The lighting system is among other things expected to enable students to walk to their hostels at night without fear of becoming victims of any form of crime. Additionally, the lights which have advertising space will be a source of third stream income for the University and its partners.

Speaking on behalf of the Midlands State University Vice-Chancellor, Professor Victor N Muzvidziwa, the Acting Pro-Vice-Chancellor, Research and Academic Affairs, Professor Doreen Z Moyo, welcomed the installation  of the solar lights saying they would provide the University with sustainable lighting and energy solutions as the institution moves to embrace smart energy solutions that are more environmentally friendly.

Also speaking during the same meeting, Midlands State University Pro-Vice-Chancellor, Business Development and Administration Professor Kadmiel Wekwete said the solar lighting project was initiated to enhance security within the campus, which is home to hundreds of students.

‘It has transformed the entrance to our University because it’s now more secure, it’s safer. There is no fear of muggings or anything like that. Before our students could not walk along that road at night but now they can do that’, said Professor Wekwete.

He also noted that apart from reducing power costs, the solar lighting system will enhance the University`s surveillance systems.

‘On the security side we are working very hard to make sure that our infrastructure and our campuses are covered by CCTV surveillance, however, its effectiveness depends on lighting … so this is a very important project and we are very thankful to ZB Bank for the support that they are giving us,’ he explained.

ZB Bank Senior Manager-Investment Banking, Mr Hugh Gutura noted that as part of the project, his bank was responsible for providing funding and technical expertise through its technical partner, MED lighting.

‘I`m happy to confirm that this journey started two years back, round about 2016. We had the installation of the first ten units, which was a pilot phase and the recent installation of twenty takes us to thirty units on the ground. So as ZB Bank we are very excited about this initiative because it has given us an opportunity to partner with the University in the supply of street lighting units,’ he said.

The university is already working with ZB Bank and MED to map out a plan which will see all its six campuses across the country being installed with the solar lighting system.

Let us know if you liked the post. That’s the only way we can improve.
MSU 2018 Open Day Receives Overwhelming Response From Schools
Elevate Trust Launched At MSU