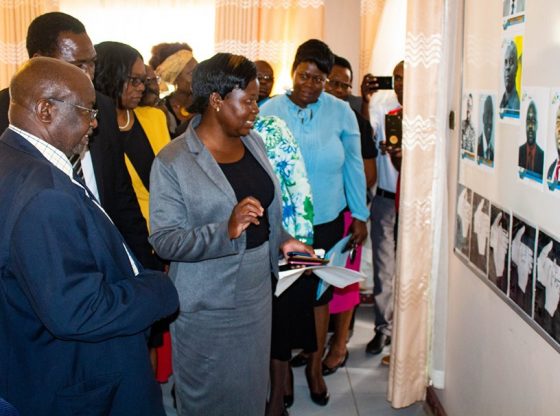 The Midlands State University Language Institute, which was officially commissioned at the Gweru Main Campus on Monday, the 6th of May 2019 by the University’s Vice-Chancellor, Professor Victor Muzvidziwa is set to significantly contribute to the preservation and promotion of indigenous languages and culture.

National efforts that witnessed the University successfully coordinating the translation of the National Constitution into all fifteen (15) local languages including sign language became the impetus for the establishment of the MSU Language Institute.

Speaking during the commissioning, Professor Muzvidziwa applauded the establishment of the Institute and said, it will provide the country with a rare opportunity to develop the nation based on the possibilities and opportunities that come with using its local languages and culture fully.

‘The idea is to use the Institute to enhance the accessibility of all vital information to all people through the translation of all key government information. Already, the Constitution has been translated into all other fifteen (15) languages, something that clearly enhances constitutionalism in Zimbabwe. Similar work could be undertaken by this Institute to produce teaching and learning materials in indigenous languages for all levels of education as a way of fulfilling Zimbabwe’s Language-in-Education Policy,’ he said.

The Institute’s Acting Director, Professor Wiseman Magwa revealed that Institute has to date established partnerships with the Ministry of Justice, Legal and Parliamentary Affairs; the Parliament of Zimbabwe; The Zimbabwe Catholic Bishops Conference; The Zimbabwe Gender Commission and Ministry of Health and Child Care.

Furthermore, discussions are underway that will see the Institute rolling out sign language training to nurses, doctors and police officers in the Midlands Province to ease challenges of communicating with people who have hearing impairments in public institutions.

‘Locally here at the Midlands State University, the Language Institute has successfully translated the University Code of Conduct and Grievances Procedure into Shona, Ndebele and Braille. Furthermore, we have also brailed important health information for the benefit of the visually impaired members of the University community,’ he said.

The Institute offers various services that include thesis and dissertation language editing, translation, document proofreading, sign language interpretation, brailing and transcription as well as the teaching of marginalised languages such as Tonga, Nambya, Sotho, Kalanga. The Institute is expected to also offer Chewa, ChiBarwe, Ndau, Shangani, Tswana, Venda and Koisan before the end of the year.

Let us know if you liked the post. That’s the only way we can improve.
MSU 2019 Cultural Diversity Carnival
Tariro NeGitare Talks about Music, Gender and Feminism