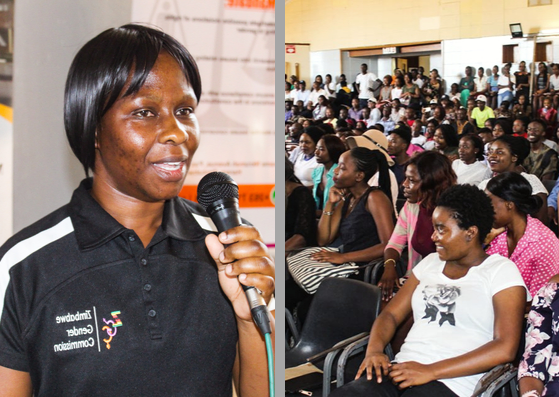 The Midlands State University Gender Institute in partnership with the Zimbabwe Gender Commission (ZGC) recently hosted a public lecture on sexual harassment aimed at raising awareness on gender and sexual harassment among students and staff at the institution.

The public lecture, which was held at the Midlands State University Gweru Main Campus on the 15th of October 2019 was also meant to conscientize the University community on the investigative role of the ZGC with regards to sexual harassment.

The MSU Vice-Chancellor, Professor Victor Muzvidziwa applauded the effort made by the Gender Institute to organise an event that addresses pertinent issues of gender inequality and sexual harassment which are becoming prevalent in today’s society.

‘I want to applaud the Gender Institute and the Zimbabwe Gender Commission for organising an awareness public lecture which addresses growing issues of gender inequality and sexual harassment in both private and public institutions and I hope it will go a long way in raising awareness and mapping the way forward for both our students and staff.

The Zimbabwe Gender Commission Legal and Investigations Officer Delis Mazambani addressed a number of key issues on sexual harassment which included teaching the audience how to identify cases of sexual harassment, how to report, where to report and also went a step further to also teach on how sexual harassment is perpetrated in cyberspace.

‘Sexual harassment is a complex issue and it ranges from offensive verbal comments with sexual innuendos, physical contact that is sexually suggestive, that is not welcome by the person concerned and it is also worthy to note that sexual harassment also occurs between people of the same sex for instance, a woman can harass a woman vice versa’.

She further explained that the Zimbabwe Gender Commission is not a women commission, but is there to serve the interests of both women and men in the society.

‘It is imperative to note that all cases of sexual harassment and domestic violence should be reported to your nearest police station, seek guidance from the university administration or raise the issue with the Zimbabwe Gender Commission and we want to assure you that we will thoroughly investigate the issue and bring the offenders to book,’ she said.

The issue of sexual harassment has become prevalent in institutions of higher learning as evidenced by the British Broadcasting Corporation documentary on sexual harassment entitled ‘Sex for Grades,’ where lecturers were demanding students to be intimate with them so that they get what are popularly known as ‘Sexually Transmitted Distinctions’.

Let us know if you liked the post. That’s the only way we can improve.
Tertiary Institutions Urged to Improve Library Services through ICT
MSU Participates in International Day of the Girl Child Commemorations