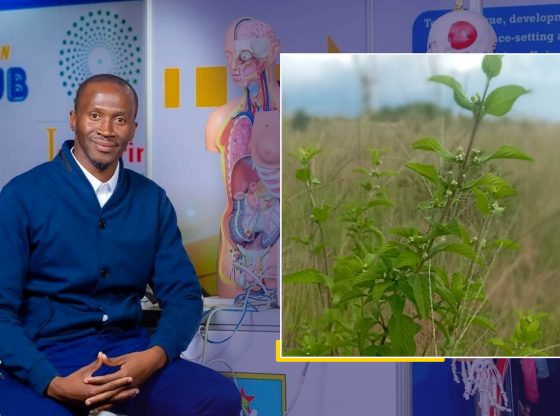 By Dr Michael Bhebhe, a Lecturer and herbal medicine researcher at Midlands State University Faculty of Medicine in the Department of Biochemistry.

I am a young Zimbabwean scientist with a Doctorate and Honors degrees in Biochemistry from the University of Zimbabwe. It is my pleasure to tell our own Zimbabwean story about one of our local plants and its benefits. In my early years as a growing scientist, I realized that if I wanted to find out about our local herbs, I had to dig a little deeper online and, in most cases, had to rely on research done outside the Zimbabwean border. My interest in studying natural products which spans over 12 years was fostered by three Professors, Maud Muchuweti a biochemist, Mudadi A. N. Benhura another biochemist, and Dexter Tagwireyi a pharmacist and toxicologist. In my studies I managed to profile bioactive compounds from zumbani extracts, quantified them, and tested them for potential to cause mutation of normal cells and poison the liver.

Zumbani / umsuzwane as is locally known, is scientifically known as Lippia javanica (Burm. f) Spreng. It is a woody erect shrub (see picture below) which not only naturally grows in Zimbabwe but can also be found in other parts of Southern, Central and Eastern Africa. Some studies have reported its existence in the tropical Indian subcontinent. Zumbani as is popularly known in Zimbabwe has several beneficial nutritional and medicinal components which make the plant both food and medicine. Plants that are both nutritional and medicinal are called nutraceuticals. Thus, zumbani may qualify as both a recreational and a medicinal caffeine free tea.

Our laboratory revealed that zumbani is a good source of phenolic compounds which act as antioxidants when consumed. See links below

The types of antioxidants which we found in zumbani are very useful in mopping out toxic chemicals (radicals) which naturally accumulate in the body when it is stressed out by a fever, disease, overthinking or even intense physical exercise. Radicals should not accumulate in the body otherwise if left to rise they may lead to detrimental ailments such as cancer, diabetes or a weak immune system. One of our studies indicated that zumbani had higher antioxidant potential than the popular commercial brand Rooibos™ which was on the shelves.

There are multiple classes of phytochemicals found in zumbani which include flavonoids, alkaloids, iridoids and essential oils which contribute to its medicinal properties. Scientific reviews carried out so far indicate that the plant has a wide range of pharmacological activities, which include antioxidant, antidiabetic, antimalarial, antiplasmodial and pesticidal effects. Yet at the same time has nutritional properties such as amino acids and minerals such as zinc.

In the recent past there has been a growing interest in consuming zumbani tea in Zimbabwe because of its associated respiratory healing properties. The plant is also known as fever tea because it has been effectively used as an ethnomedicinal cure for fevers and chest related ailments such as sore throats, coughs, bronchitis, sinuses, pneumonia and asthma. It is important to emphasize that this is not a prescriptive article to anyone who may have any of the above ailments, but a general report of how the plant has been effectively used in ethnomedicine. It is encouraged that anyone with a health altering condition first seek medical attention before they can try alternative means.

Zimbabweans in most cases use zumbani either as dried or fresh leaves brewed into an herbal tea / tisane and drunk as is or in some cases with sugar or honey to taste. It is more beneficial to drink without milk as the milk proteins and fats may mask some of the health beneficial phytochemicals. There are also some volatile medicinal phytochemicals found in the plant which explains why it is has also been effectively use d for steaming to clear out nasal passages. In communal areas where it grows abundantly, it is also commonly used as a mosquito repellent and for treating skin infections because of its antimicrobial properties. In some parts of Zimbabwe, the leaf ointment is rubbed on the chest and abdomen as a remedy for pneumonia.

Despite the fact that the present-day consumer is more aware and concerned about safety issues, toxicological studies on herbal teas from Zimbabwe have been scarce. If any herbal product, whether tea or otherwise, is to acquire global acceptance, the consumer must be satisfied that sufficient enquiry and interrogation has been done with respect to safety and toxicity. So far in my doctoral studies, I tested zumbani’s potential to harm the liver and kidney if consumed in excess and found that there was no detectable harm on these vital organs.

So far no comprehensive clinical study has been published to confirm zumbani as a solution to the raging corona virus pandemic. Most Zimbabweans who are using it have latched their hopes on the plant because of its effective respiratory healing properties which have stood the test of time in ethno medicine. It would however be prudent for Zimbabwean scientists to conduct clinical studies to vindicate circulating claims about the plant’s potential to treat or reduce the onset of corona virus disease 2019.

While there is still a need to unravel more magical properties of the plant, medical scientists and agronomists must form collaborative linkages with both local and international partners in order to grow a viable nutraceuticals industry in the country. So far in Southern Africa, zumbani is fairly traded in Zimbabwe, Botswana, and South Africa and scantily on the internet. There is however a yawning gap when we compare with rooibos as there still is no data on production levels, traded volumes, export figures and even a regulatory body to control its production, trade and quality of product. It is my sincere hope that we will live to see the dream of a thriving natural products industry in the country.

My interest in studying zumbani was largely inspired by the Aspalathus linearis plant popularly known as Rooibos™ which grows mainly in South Africa and very limited Mediterranean climates worldwide. Rooibos is one of the few wild species rich in antioxidants to have been developed as a commercial crop in the last 100 years. This was largely because South African scientists invested in testing the plant’s nutritional, medicinal and potentially harmful effects. After unravelling most of the beneficial properties and ironing out any potential toxic parameters, they went on to understand how the plant could be propagated and grown on a large scale. Fast forward, the plant is now one of our most cherished herbal teas world over. I believe zumbani tea has the same potential to follow the same trajectory.

Let us know if you liked the post. That’s the only way we can improve.
Condolence Message
MSU Engineering and Geosciences Students Launch Mining Safety Campaign