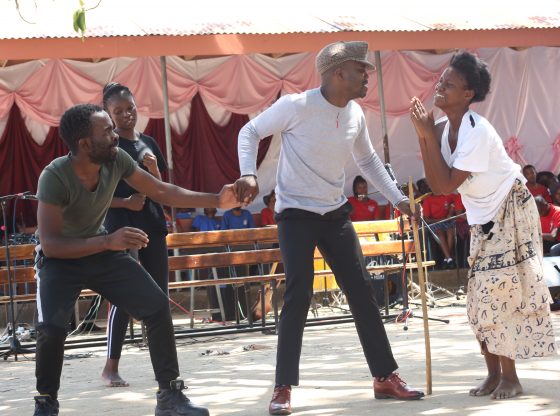 Featured,News,zvishavane |
Midlands State University‘s (MSU) Media, Communication, Film and Theatre department descended on Pamushana High school in Masvingo on the 6th of November 2021 where they delivered a moving music theatrical on Gender-Based Violence (GBV).
Students studying film and theatre arts together with their lectures Mr Brighton Munaku and Mr Godknows Chera made up the play’s cast. The production was aimed at bringing awareness on issues of gender-based violence particularly among women and young girls who are often the victims of gender violence.
A huge audience consisting of pupils and members of the public from the immediate community came together to watch the performance.
Speaking soon after the event, Pamushana High School Headmaster Mr Agrippa Moyo said that he was pleased with the performance as it helped learners to appreciate gender-based violence issues.
“I was quite impressed by the performance, this will help people especially young adults and the youth since they are our future leaders who should learn on issues of gender-based violence,” he said.
He also added that the performance was an eye-opener for pupils and the community at large.
“Pupils who hail from homes where they witness domestic violence say they are traumatised by it and when they learnt about it today from the play, they are now informed and when they get back home, they will hopefully discuss with their families the issues they have learnt today.
Reverend Innocent Munenerwa, Station Superintendent for both Pamushana High and Marozva Primary Schools thanked the Media, Communication Film and Theatre department for gracing their school which he hopes will encourage some students to take up degree programmess in the Faculty of Arts and Humanities.
“I am pleased with this performance, it will help shape the careers of other students who are pursuing arts and it demystifies the notion that science subjects are more superior than arts. Whatever you do in life, if you put all your heart into it, it will bear fruit.
“We wish to have more shows staged for us, especially on English Literature set books, such performances will allow pupils to visualise what they read in the novels,” said Rev Munenerwa.
In an interview, Mr Munaku said the musical theatre performance is important especially during these COVID-19 times where GBV cases are on the rise.
“Gender-based violence is a pandemic just like COVID-19. Many girls and women are victims of this violence. I’m sure this musical theatre performance has made people aware, especially high school students on issues related to gender-based violence.
Every year the department of Media, Communication, Film and Theatre stages theatre performances based on a set book on the Advanced Level syllabus, at selected high schools.
On the 13 of May this year, the department also performed an A- Level set book She No Longer Weeps by Tsitsi Dangarembga at Mkoba 1 High School in Gweru.

Let us know if you liked the post. That’s the only way we can improve.
Team MSU Wins 2021 ZUSA Games to Maintain Dominance Over Rivals