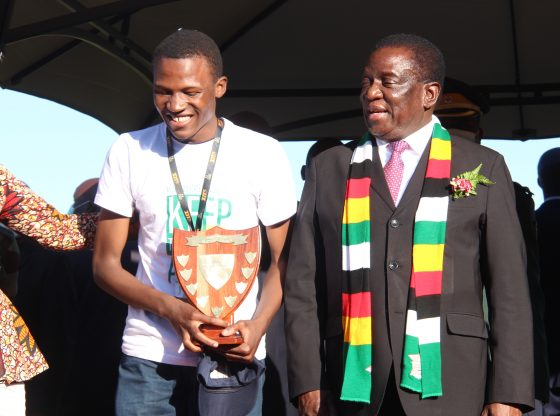 Tendai Gatahwa, a Computer Sciences student at the Midlands State University scooped the Best Innovator Award at the Zimbabwe International Trade Fair (ZITF) Innovation Forum held from the 26th to the 29th of April 2022.

President Emmerson Mnangagwa, who was the Guest of Honour at the ZITF official opening ceremony presented Tendai Gatawa with the  ZITF best innovator 2022  floating trophy and a medal.

Gatahwa, is the captain of MSU’s Nerd IQ  team that came tops at the innovation pitch challenge where 14 teams fought it out for the first place.

It was after displaying distinct intellectual acumen at these two challenges that Tendai Gatahwa bagged the top gong.

The winning innovation is a decentralized e-business system that uses artificial intelligence to supply chain challenges.

Tendai Gatahwa said that he made it because of the support of his team players and the support he received from his mentors.

“I am thrilled by the amazing performance that the team has put in and this gives us a feeling that we are going in the right direction.

“We want to create a completely decentralized ecosystem in places like hospitals, schools and government departments. We have firm belief as a team that this will also increase efficiency in the fight against corruption making this innovation one for the future,” he said.

The Midlands State University Research and Innovation Directorate expressed their heartfelt joy at the outstanding performance of the young innovators who are nurtured at MSU’s Innovation Hub.

“As a university, we are ecstatic to have such dedicated and dynamic young innovators with a promising future in the innovation area.

“These young innovators are currently housed at the MSU Innovation Hub, where not only is what they pitched being nurtured but so are many other high-level innovations.

“As the Directorate of Research and Innovation at MSU, we congratulate the young innovators’ mentors, especially Mr. Rebanewako, Mr. Gotora, Mr. Dandira, Dr. Muziri, Dr. Usai, and their faculties and departments, for guiding them this far. We also thank Elevate Trust CEO Sicelo Dube and her team’s efforts in providing this chance to our young innovators, as well as her motivational speech and grounding during the Young Innovators Forum,” said Professor Upenyu Guyo, MSU Deputy Director of Research and Innovation.

The Midlands State University Innovation hub houses a wide range of innovators from various faculties and the results are outstanding as shown at the innovations forum at the Zimbabwe International Trade Fair is just a signal of what is to come.

The winning innovation is in tandem with Zimbabwe’s vision of attaining an upper-middle-income economy by 2030. Innovations driven by technological advancements will be a major driver in the attainment of this goal.

Let us know if you liked the post. That’s the only way we can improve.
GENDER INSTITUTE – UPDATED CALL FOR ABSTRACTS
Botswana International University of Science and Technology Researchers Visit MSU