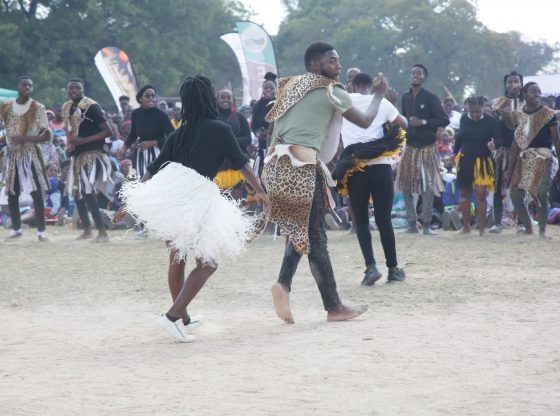 News |
Midlands State University (MSU), Music Business, Musicology and Technology students stole the show at the fun-filled Midlands Province Culture Day celebrations held at Muchakata Business Centre in Chiwundura this Tuesday 27 July 2022.
Enchanted by the scintillating musical showcase by the MSU band, Minister of State for Provincial Affairs and Devolution in the Midlands Province Cde Larry Mavima presented the group with US$100 prize money.
Various cultural and musical groups took turns to stage their performances at the Ministry of Youth, Sports, Arts and Recreation organised cultural spectacle.
Cde Larry Mavima, who was the guest of honour at the event, encouraged citizens to maintain the culture of respect and tolerance that Zimbabweans are known for globally.
“Let us respect the peace we enjoy as a country. We don’t like to hear the stories of machete fights. We can go to our chiefs and headmen when we have squabbles and not use machetes. Even if we come from different tribes and ethnic groups, we should live peaceably and have respect for each other, let’s not attack each other with machetes,” he said.
“I also want to thank our First Lady Dr Auxillia Mnangagwa for promoting our culture and heritage and introducing many programmes to that effect. She inaugurated a programme where women share ideas on how to prepare healthy traditional food.
“She also launched the Gota-Nhanga programme and she will soon launch the male engagement programme. All these programmes promote our culture and enhance peace and tranquillity,” he added.
Making a presentation on the role of language in culture, Professor Advice Viriri, who was standing in for the Vice Chancellor, made reference to Ngũgĩ wa Thiong’o’s book, Decolonising the Mind.
He said that language has an equivocal role.
“Besides being a means of communication, language is a carrier of culture. Language is a form of identity, it tells us about who we are, where we come from and where we are going as a people,” he quipped.
Professor Viriri also told the gathering about the inroads that the MSU is doing in promoting language preservation in Zimbabwe.
“MSU has translated the supreme law of the land; the constitution, into all 15 indigenous languages. We are also translating the Highway Code into local languages,” he added.
The Culture Day commemoration drew many cultural groups from all the districts of the Midlands Province, amoung them Nyau from Kwekwe, ZNA Band, Dingindira from Zvishavane and Matinunura from Gweru.
The event was graced by Chiefs Chiwundura, Chisadza, Gambiza and Bunina, local headmen, provincial and district heads, councillors, Environmental Management Agency (EMA), Telone, Kwekwe Polytechnic, Zimbabwe National Army, ZINANTHA, National Arts Council and Ministry of Youth, Sports, Arts and Recreation officials.