The Trophy Is Here… 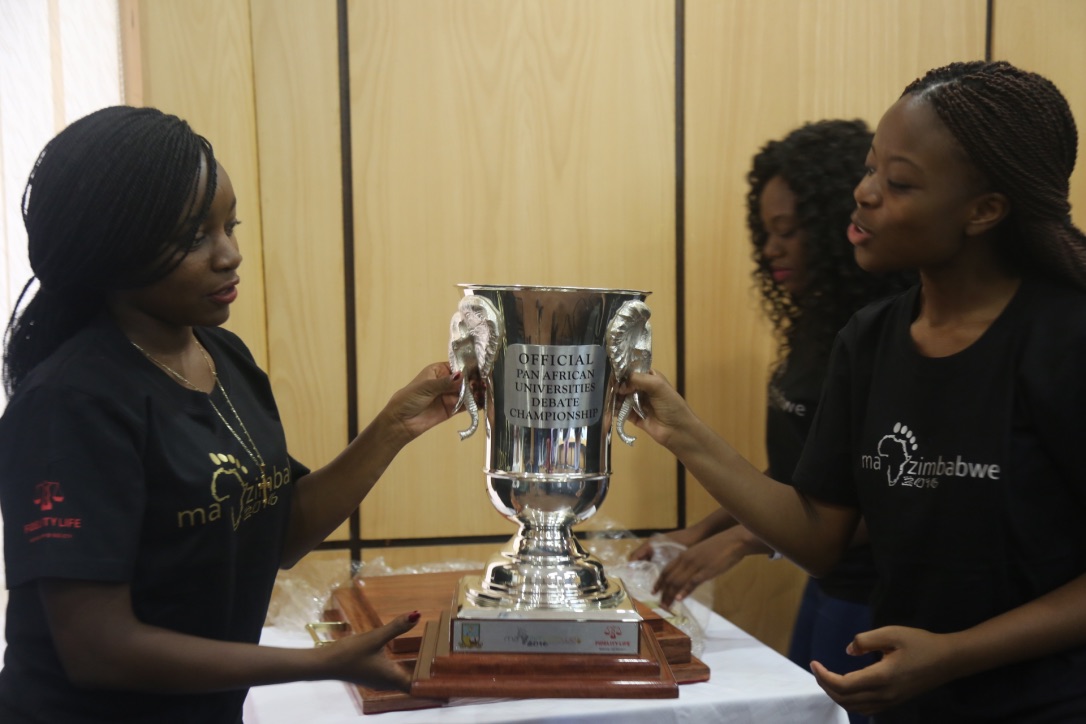 The Pan African Universities Debate Championship (PAUDC) 2016 trophy was unveiled amidst pomp and fanfare at a glittering ceremony held at Midlands State University on Monday, 7 November 2016.

Leading financial and health services provider, Fidelity Life Medical Aid Society donated the approximately 7 kilogram teak and silver trophy, valued at $2 500, in a gesture that provides added impetus to preparations for the Debate Championship to be hosted by tournament defending champions, Midlands State University from the 9th to the 17th of December, 2016.

Speaking during the handover of the floating trophy, Midlands State University Acting Vice Chancellor, Professor Ngonidzashe V. Muzvidziwa expressed the institution’s gratitude to FLIMAS for their unwavering support for the University’s different initiatives. Professor Muzvidziwa noted that the donation by FLIMAS was testimony that the mutually beneficial relationship between the two institutions continues to grow from strength to strength and urged FLIMAS to continue supporting the University’s various initiatives.

FLIMAS Chief Executive Officer, Mrs. Nyaradzo Matindike expressed her institution’s pride in aiding the institution’s efforts to host the PAUDC noting that the partnership between FLIMAS and MSU has come a long way. Mrs. Matindike Challenged the debate team not to “lose” the trophy by successfully defending the championship that they won in Ghana in the 2015 edition of the PAUDC.

In a noteworthy development, FLIMAS will sponsor a trophy tour that will see the newly minted trophy being taken to the different institutions within Zimbabwe that will compete in the 2016 edition of the Pan African Universities Debate Championship. The dates for the tour are yet to be finalized.

The handover of the trophy was attended by senior members of University staff including the Bursar as well as Deans and Directors of different Faculties and Departments within the University. Newly appointed Student Representative Council President Jorum Mukono, members of the SRC, members of the debate club and representatives of the sponsors were also in attendance.

Let us know if you liked the post. That’s the only way we can improve.
Community Engagement Goes Beyond Bars
MSU Teams Up with Mutare Community in Clean Up