MSU Law School among the top ten in the world 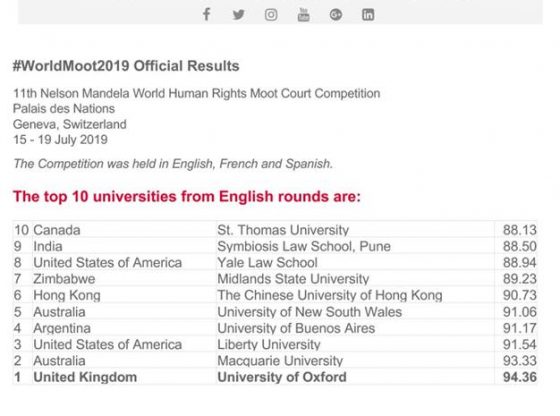 For the second year in a row, Midlands State University, Faculty of Law has landed in the top ten of the Nelson Mandela World Human Rights Moot Court Competition. The competition was held at the United Nations Palace of Nations in Geneva, Switzerland between 15 and 19 July. This competition brings together top law schools from across the globe, with 39 universities qualifying for the 2019 edition.

Midlands State University ranked 7th and was the only African university in the prestigious top ten. The top ten featured reputable universities such as Yale, Oxford, St Thomas, Macquarie, Liberty and New South Wales. This year`s edition revolved on novel areas of international law relating to artificial intelligence, scientific developments and their interplay with rights of persons with disabilities.

The team coach Mr Conrad Nyathi said this year`s performance which is an improvement from last year, speaks to the quality of education that is offered by the law school which is reputable by any global standards.

“It definitely puts us on the map. In this edition, our team went up against Yale, one of the top universities from the United States and after that round the team from Yale was impressed because they didn’t expect Zimbabwe to have law students who perform brilliantly at such an international level. That means they obviously went back home with revering stories about the high quality of education offered by Midlands State University,” said Mr. Nyathi.

The two students Zwelithini Xaba and Mazviita Mlambo both in their fifth year, got invaluable exposure to international human rights experts. The competition groomed and encouraged them to be international human rights advocates. In the last two editions MSU has won the Best Memorials award twice and that means every other university had to use the MSU template to qualify for the competitions this year. Currently the Faculty is preparing for the International Humanitarian Law Moot Court, amongst other competitions on this year’s calendar.